Skip to content
Home » Blog » A Family of 5 – BelleVue Story 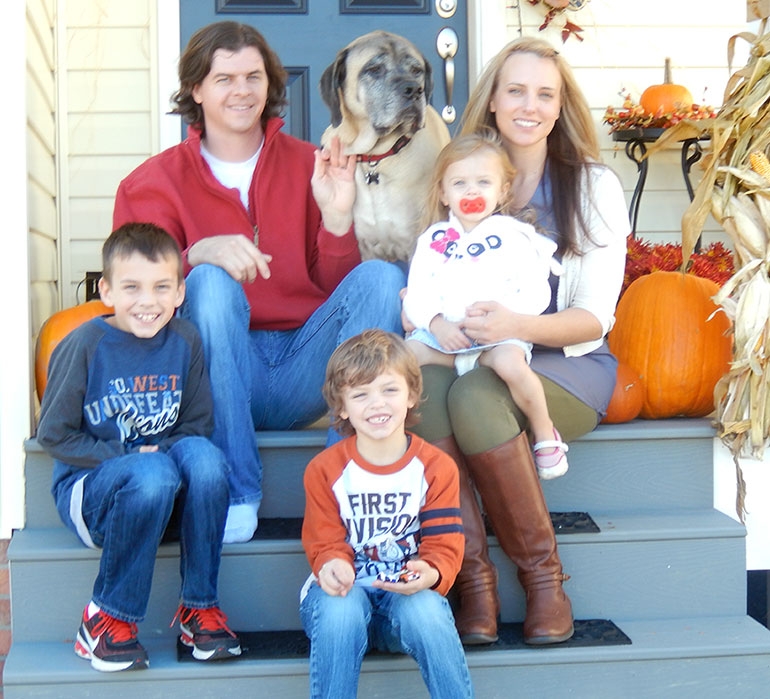 Justin and Noelle Weaver lived in Crafton outside of the City of Pittsburgh with there two son’s Carson (8), Logan (6) and daughter Brooklyn (2), for over 10 years. Their daughter Brooklyn was born with an undersized airway and a cleft in her esophagus that prevented her from keeping food and liquids out of her lungs. After a failure to thrive diagnosis at 6 months old, chronic illness, two surgeries by 18 months, and therapy to correct throat-related development and feeding delays, the Weaver’s started to look for a home close to Justin’s parents living in Cranberry, who frequently supported the family during Brooklyn’s hospital visits and illnesses. Living in Crafton the family home was close to the city, on a street with young families, near a community park, shopping, and was walking distance to the elementary school, the public Library and restaurants. Getting a home in suburbia with similar characteristics didn’t seem possible until they stumbled on Belle Vue Park while searching for homes near parks, shopping, and the Library. After searching pre-owned and new home developments Noelle and Justin found the best-fit floor plan and housing plan was Belle Vue Park. “It was a God-sent miracle when Michele Fausnacht called and told us lot 84 was off reservation and was available!,” Noelle recalls, “After looking for 6 months, we had given up on finding something we both agreed on and that lot offered us the unique Williamsburg home plan we wanted with the yard we wanted, and the ability to add a third car garage. It was as close to perfect as we were going to get!” Noelle and Justin have enjoyed their kids playing soccer and deck hockey at Graham Park along with the close connection to Haine Elementary school functions and the Cranberry Library. Noelle tells everyone, “We are all looking forward to using the pool this summer, meeting neighbors– watching the last of the new homes go up, and sitting out on our beautiful porch in warmer weather!” Noelle and Justin feel very blessed to be in Belle Vue Park having the custom home they wanted, tailored to fit their family in a location close to family, with great neighbors, in a lovely community with many families with young children. Noelle and Justin are both employed at Michael Baker International. Justin is a Registered Architect and Noelle is an NCIDQ Certified Commercial Designer. Their current projects include Michael Baker International’s corporate office relocation to the Penthouse suite of BNY Mellon and large overseas projects for the Army Corps of Engineers, Middle Eastern District in Saudi Arabia.

We found Weaver Homes staff to be very professional and caring. They answered all of our questions and answered all of our calls. Our home is beautiful and well constructed. We would recommend them to anyone looking for excellence in a new build home.

We could not be more pleased.

We could not be more pleased with our experience with Weaver Homes and their employees. They are all very professional, personable, and dependable. We have been working closely with our Sales Consultant and she is always available to answer our questions or help in any way. We cannot wait to move into our new home at Heritage Crossing.

Weaver Homes is top notch compared to other builders! High quality homes and amazing staff. Our sales rep is the real deal. Professional but not pushy! Fun to work with!